Hey there, this section is part of our Core Content, which means we ask that you sign up and take our quiz before reading it (or log in if you've already created an account). But don't worry, signing up is free and easy, so what are you waiting for?!

Okay, we know no one likes paying taxes, talking about taxes, or even thinking about taxes. But we do need to face the faxes, er, facts. Regardless of how you feel about them, taxes are a fixture of our financial system. And they can have a big impact on your financial life. So it’s important to know how they work.

Unfortunately, the U.S. federal (national) tax system is complicated. And on top of that, many of us will have to pay state and local taxes as well, only adding to the confusion. That means we can’t cover every last detail. So in this section we’re going to limit the focus to some core ideas about how taxes work.

The concept of an income tax is fairly straightforward. It’s a tax on your earnings. The amount you owe will depend on the amount you earn. And for most of us, income taxes make up the bulk of the taxes we pay every year.

There are three main components of your income taxes;

Your federal income taxes will likely be the largest component, so we’ll cover that first.

Currently, there are seven tax brackets based on income level. The specific tax rates get adjusted over time and will also depend on whether you file your taxes as;

• A head of a household

The 2019 rates for an individual are: 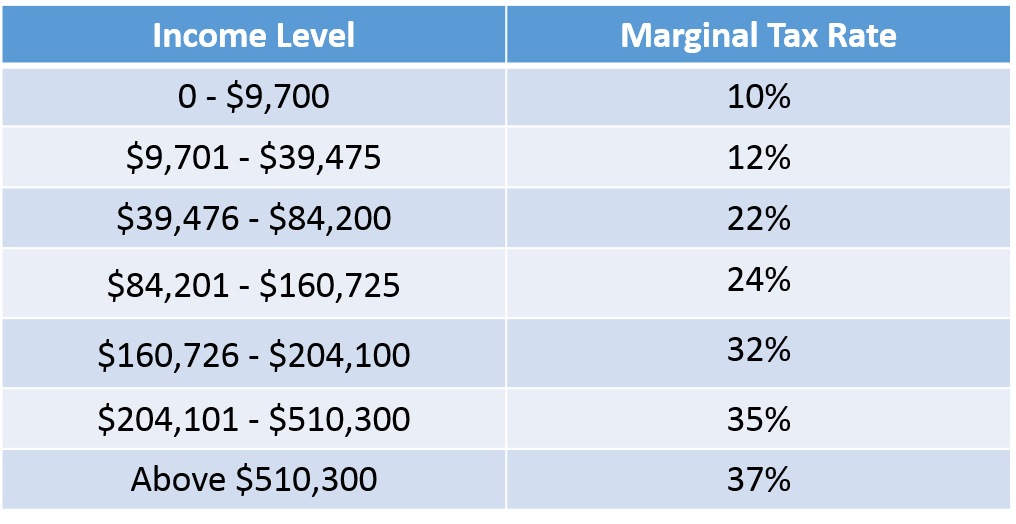 The tax bracket your income falls into will determine your marginal tax rate.

You don’t actually pay the marginal tax rate on all of your income though.

The rate you actually pay is your effective tax rate. This is the total amount you owe in taxes divided by your taxable income. It’s like an average based on the different marginal tax rates.

This may sounds a little complicated, but don’t stress. If you use tax preparation software, it will automatically take the progressive structure into account for you. This is also the case if you use the official tax forms provided by the government.

These percentages are not dependent on your tax bracket the way your federal income taxes are.

Aside from paying federal income taxes and FICA taxes, you may have to pay state or local income taxes. These will vary depending on where you live.

While some states don’t tax income, most do, so you’ll need to be aware of the taxes in your home state.

In addition to paying taxes on your ordinary income, you also have to pay taxes on money you earn on your investments. This would include interest, dividends, and capital gains.

We cover all of these in more detail in the sections on investing. But we’ll take a quick look at how they’re taxed here. (We should also note that in addition to the investment taxes we are about to cover, investment income can also be subject to an extra 3.8% Medicare tax for individuals in the higher tax brackets.)

For the most part, the IRS classifies interest income as ordinary income. This would include interest earned from bonds, CDs, and savings accounts. It’s therefore taxed like your ordinary income. However, there are some exceptions.

Interest earned on U.S. Treasury securities (bonds issued by the U.S. Government) is not taxable at the state level. (It’s still taxable at the federal level though.)

Dividends received from investing in stocks are also taxed, and can fall into two tax categories. Qualified and Non-qualified (also know as ordinary dividends).

Non-qualified dividends are taxed at the same rate as your ordinary income.

This means, unless you’re actively buying and selling stocks frequently (which you probably shouldn’t be doing anyway), your dividends will most likely be qualified and will therefor be taxed at the lower rate.

The tax rate you’ll pay on qualified dividends is somewhat tied to your marginal tax bracket. The table below shows the brackets. 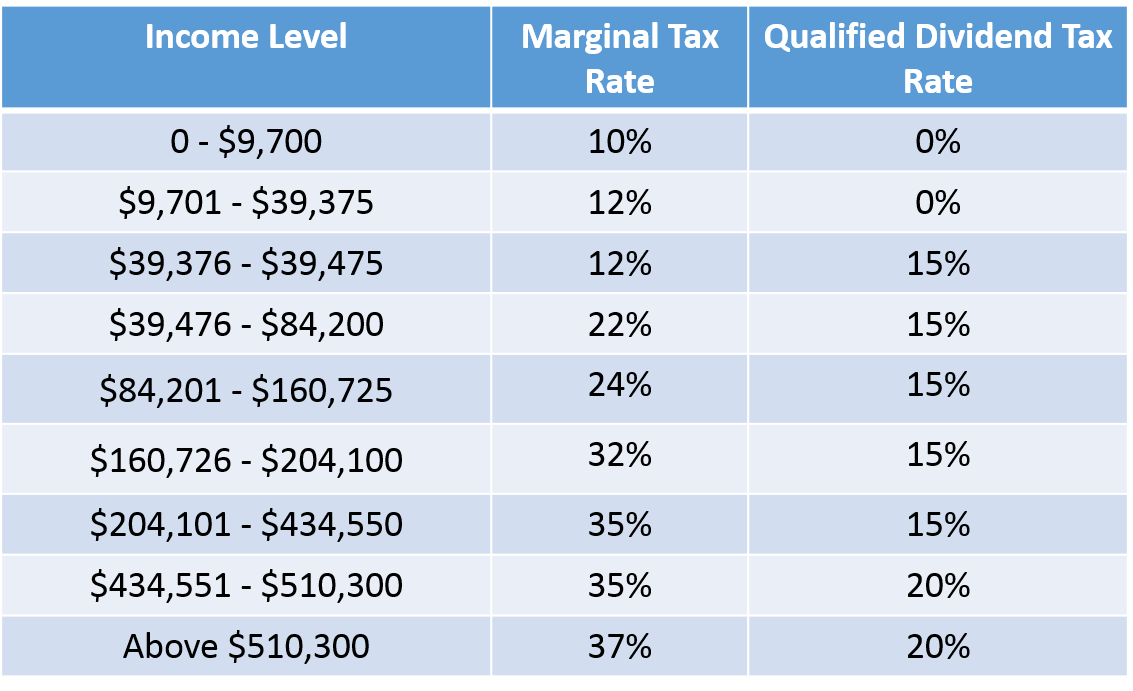 When you sell an investment for more than what you paid, you’ll have to pay taxes on the increase, or capital gain. The tax rate will depend on how long you held the investment.

If you’ve held it for a year or less, it’s considered a short-term capital gain, and you’ll be taxed as if it’s ordinary income.

If you held the investment for more than a year, it’s considered a long-term capital gain and it will be taxed at the same rate as qualified dividends (see the table above).

Sometimes our investments go down in value though. And if you sell an investment for less than what you paid, it’s considered a capital loss. You can use it to offset your gains for tax purposes.

Some investment accounts, like 401(k)s, IRAs, and 529s, are tax-advantaged, meaning they offer some form of tax benefit that can lower your taxes.

For example, with a 401(k), your income taxes are deferred.

This means you can contribute money directly from your paycheck without paying any income taxes on it. Your money can then grow tax-free until you take it out in retirement. At that point, you will have to pay income taxes (sorry, can’t win ’em all).

Managing your tax-advantaged and taxable accounts

Additionally, you may have money in multiple investment accounts that are subject to different tax rules.

Unlike the 401(k), the brokerage account has no tax-advantage. You’ve already paid income taxes on the money in it. And you’ll also owe taxes on the investment earnings. This would include interest, dividends, and capital gains.

Since these two types of accounts have different tax rules, you’ll want to consider taxes when you decide which investments to hold in which account.

Investments that get taxed at a higher rate, like interest paying bonds, may be better suited for your tax-advantaged account.

Investments that get taxed at lower rates, like dividend paying stocks (or stocks that pay no dividends at all), may be better suited for your taxable brokerage account.

You’ll want to consider other factors too (like when you’ll need the money). But taxes can play an important role in optimizing your planning.

In addition to using tax-advantaged accounts, you can also potentially reduce your annual taxes through tax deductions. For example, the interest on a mortgage is tax-deductible. You can subtract it from your taxable income to lower your tax bill. This is also true for gifts made to qualified charities.

But again, the U.S. tax code is complex and the list of deductions is too extensive for us to cover here. However, most tax preparation software will help you figure out what deductions you qualify for. The same goes for the official IRS filing instructions. If you feel you can use more help, you can always seek advice from a tax professional.

When to pay your taxes

As you’re probably already aware, tax returns are due by mid April every year.

However, we’re supposed to be paying our taxes throughout the year as we earn income. If it turns out you haven’t paid enough taxes by the time your return is due, you may be subject to a late penalty.

Many employers will automatically withhold a portion of your income for taxes. But, if you’re self-employed or if you have additional income, say through your investments, you may need to pay quarterly estimated taxes on your own. You can learn more about estimated taxes on the official IRS website.

When you’re estimating your taxes for the year, take into account how much your employer is withholding already on your behalf, what your previous annual taxes were, and what you expect to earn this year.

While you don’t want to underpay your taxes throughout the year (because you might get hit with a penalty at tax time), you don’t want to pay an excessive amount either. You can eventually receive any over-payment with your tax refund, but you’ll effectively be lending money to the government, at zero interest, until you get the refund.

Beyond income and investments

The majority of taxes you’ll pay are most likely going to be from earned income and investment income, and we’ve really just scratched the surface of these. But also keep in mind these aren’t the only taxes out there.

1) Taxes should be incorporated into your financial plan.

2) Your income taxes will dependent on your tax bracket and your marginal tax rate.

3) Tax-advantaged accounts, like 401(k)s and IRAs can help limit the taxes you pay on your investments.

4) Not all investment income is taxed equally, so you may want to hold investments that are taxed at higher rates in tax-advantaged accounts.

5) You’ll want to pay your taxes throughout the year as you earn money to avoid late penalties (most employers will withhold taxes for you), however you generally don’t want to excessively overpay and wait to get it back with your tax return because that amounts to an interest-free loan to the government.

Sign up to see the rest of this article!